In what GP 2020 hails as a victory for accountability, BC Parks provided us with a new map of Garibaldi Park showing the overlapping Wilderness Conservation Zone and heli-skiing permit area boundaries. We were also informed by Ms. Jennie Aikman, Regional Director, South Coast Region, BC Parks that the heli-ski permit area has been significantly reduced in area. Ms. Aikman states in her letter to GP 2020,

In the case of the heli-skiing permit Whistler Heli-Skiing has reduced their permit area to remove areas of high use in the vicinity of Decker Mountain, as well as runs in the Iago and Quiver areas. We recently had our mapping specialist digitize the boundary of the Wilderness Conservation Zone and have now overlain this with the updated heli-ski tenure mapping. I have attached a copy of the mapping for your reference. While the mapping does indicate a minor overlap of the heli-ski tenure with the Wilderness Conservation Zone, I wish to reiterate, as we discussed during our meeting with you in October, that the heli-ski tenure overlap may be the result of less precise mapping and spatial information that was available at the time the zoning was established. Regardless of the cause of the overlap, BC Parks continues to work closely with the heli-ski operator to minimize potential impacts to park values.

GP 2020 welcomes this news from BC Parks as it starts to address the significant irregularities with the permit that we raised with Ms. Aikman. It also confirms that the mapping that GP 2020 initially undertook to show the overlap between the permit area and the Wilderness Conservation Zone was largely accurate and our conclusions were sound.

The map released by BC Parks can be found here: Whistler Heli-Ski Tenure Map Reduced 2016

We note at this time that the Wilderness Conservation Zone's western boundary on the new map appears to go through Berna Lake, whereas as the map at the Diamond Trailhead kiosk shows the boundary going 400 meters west of the lake.

Map showing the area for the permit that expired in 2016: Spearhead Heli-skiing Park Use Permit Map (expired 2016) 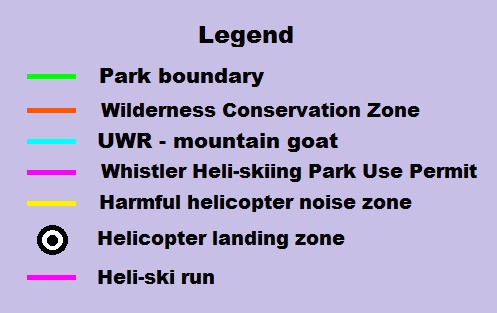