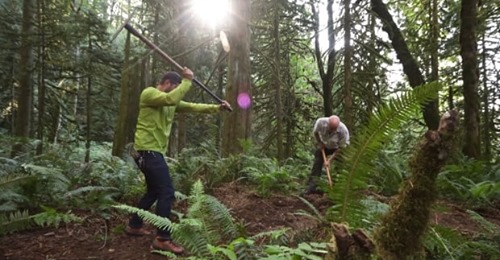 People volunteer to build and maintain trails the local community wants to use, but they can't continue their work into the Crown land — the province has ordered the Chilliwack Parks Society, of which Houlker is a member, to cease and desist.

"I was quite shocked," said Houlker. "I haven't done any [trail building] for a few weeks now, which I'm kind of upset about."

According to Waddington, the owner of a local outdoor equipment store, the cease and desist order at Lexw Qwo:m Park is part of a larger trend of increased enforcement on unauthorized trails in the area — but in many cases, authorization is a glacially slow process.

"There is a permitting process in place, but there have been massive delays," said Waddington, who claimed some of the trails where new warning signs from the province have appeared have been waiting for approval for several years.

Waddington said he recently got a visit at his store from an enforcement officer with the Ministry of Forests, Lands and Natural Resources. He was told to quit work on a trail near Cultus Lake on Crown land.

"Trail cameras were set up in the forest to catch some of us that were out there," he said, though he never saw the cameras and wasn't shown the photographic evidence.