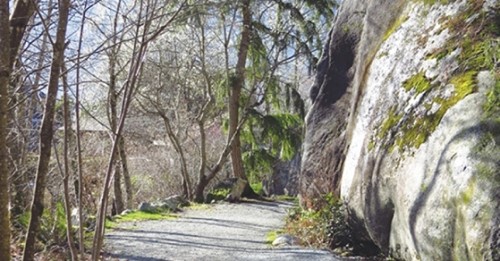 I don't fully understand the politics and background of this issue; specifically the issue of having a SORCA as a member representative on the Smoke Bluffs Committee.
Perhaps there are some members of Backcountry BC who can provide me with more information and a better understanding of the issue in the comment section below.
-x-
No voting SORCA member for Smoke Bluffs Committee
The committee asked council to add a voting member of SORCA

In a divided vote, council decided to turn down a proposal to add SORCA as a voting member of the Smoke Bluffs Park Committee.

On May 7, councillors Chris Pettingill, Jenna Stoner, Doug Race and Mayor Karen Elliott voted against adding a member of the Squamish Off-Road Cycling Association to the committee.

Councillors John French, Eric Andersen and Armand Hurford were in favour of the proposal.

The idea of adding SORCA as a voting member came about after a miscommunication resulted in trail design problems in the Smoke Bluffs.Mountain bikers raised concerns about how the partially-built East Side Loop Trail intersected with historically-used mountain biking and motorcycle paths.

They said this could lead to significant safety issues, among other things.

As a result, the committee decided that a portion of East Side Loop Trail would be reclaimed, a recommendation that was approved unanimously by District council.

The reclamation will be from the northern edge of the Grand Doug Crag cleared area to the end of the built portion of Phase 2, or the second section.

Furthermore, to avoid miscommunication in the future, the Bluffs committee recommended that council amend bylaws to add a voting member from SORCA.