Once again, the BC Government and BC Parks has sided with Commercial Interests in a Provincial Park by restricting access to the backcountry and the historic Howe Sound Crest Trail.

In January 2016, Cypress Mountain ski area unilaterally implemented a policy preventing public access between 11 PM and 9 AM to the Backcountry Access Corridor leading to Howe Sound Crest, Black Mountain and Bowen Lookout Trails in Cypress Provincial Park. The BCMC board researched the issue in conjunction with the FMCBC Recreation and Conservation committee. What we found is that there was no public consultation as required and that the policy is in direct conflict with provisions protecting public access in the park master plan.

We are working to restore 7 x 24 hour access to this important corridor as required in the Park Use Permit.

The Cypress Backcountry Access Corridor can now be accessed from 7AM. Note however, that the Cypress Bowl Road continues to be gated until 7AM at Chippendale Drive. In contravention to their park use permit, Cypress resorts has been preventing access to the corridor from 11PM to 9AM and this continues to be their official position. While discussions between BC Parks and Cypress continues, the new manager Russell Chamberlain will allow public access through the BAC once the road is open. It continues to be our position that the BAC should be open 7 x 24 year round and that the road should not be gated unless there is a hazard. It takes at least 45 minutes to drive up the road, get geared up, and access the trailhead which continues to make it impossible to start skiing at first light. In the early winter months backcountry skiers traversing the HSCT from Cypress to Lions Bay require the entire day to complete before dark. You are still required to pick up a free backcountry access tag / waiver from the old lodge. See the map below for the location of the BAC as well as the old lodge. Lot 3B is the designated parking lot for backcountry users and the resort is within their right to refuse parking at lots 1, 2, and 3 which fall within their conrolled recreation area.
The PUP is subservient to the Park Act and government authority which states that all parts of the the park shall enjoy year-round public access. The gating of the road and staffing of the booth is being done by Cypress Resorts and is also in contravention of the Park Act. The BAC is an excluded area of the CRA and therefore does not fall under the jurisdiction of the resort. There seems to be a lack of awareness of this significant authority in the tone of the BC Parks letter from Nov 9, 2017.
Feel free to present the information below to resort / parks staff / authorities should they not be familiar with the new guidelines.This article is mobile friendly and can be displayed by most smartphones.
Source: http://www.env.gov.bc.ca/bcparks/explore/parkpgs/cypress/ 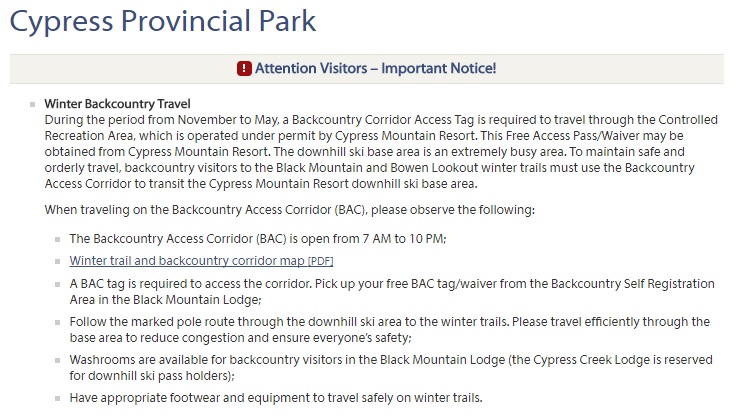 3.06 The Permittee shall, during the Ski Season, have the right to charge any person using or passing through the Controlled Recreation Area such fees in such amounts as the Permittee may determine from time to time including, without limitation, fees for parking, skiing, snowboarding, snow sliding and other activities permitted in Schedule "A", provided that no fees may be charged for:

3.064 The Province shall patrol the Backcountry Access Corridors at regular intervals during the Ski Season, including daily patrols if necessary, to ensure that such corridors are being used only in accordance with this agreement and the Province shall erect, maintain and enforce compliance with park signs which specify the purpose for which the Backcountry Access Corridors may be used pursuant to section 3.061.

3.067 The Permittee shall at all times during the term of this agreement permit any person to pass through or across Parking Facilities for purposes of access to and egress from the Hikers' Trail Trailhead, and in doing so the Permittee shall not require such person to:

4.01 The Permittee covenants and agrees to

The access strategy for Cypress Provincial Park recognizes the environmental and aesthetic sensitivities of the park’s natural and wilderness areas. Terrain and neighbouring jurisdictions help to control access points in the more remote areas of the park. The present trail system uses many of the old routes developed by hikers and skiers over 50 years ago. 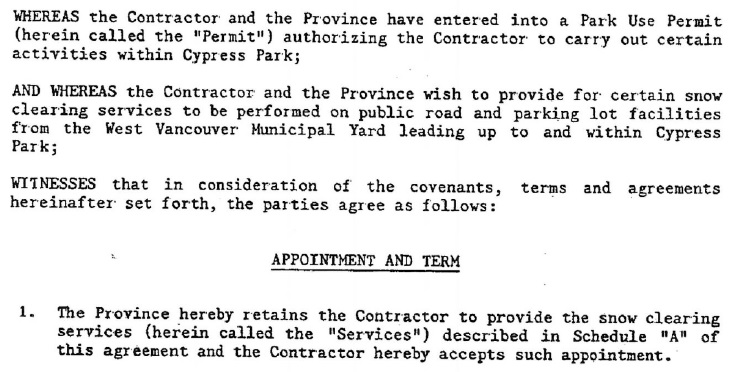 Winter trails are marked with red dotted lines. The BAC is a green circle with a striding hiker atop the acronym BAC. 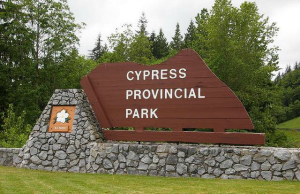 Once again, the BC Government and BC Parks has sided with Commercial Interests in a Provincial Park by restricting access to the backcountry and the historic Howe Sound Crest Trail.  Although Cypress Provincial Park is considerably south of Garibaldi Provincial Park, we feel duty bound to also stand up for non-mechanized backcountry users at Cypress.  It seems a pattern has emerged.

In January 2016, Cypress Mountain ski area unilaterally implemented a policy preventing public access between 10 PM and 9 AM to the Backcountry Access Corridor leading to Howe Sound Crest, Black Mountain and Bowen Lookout Trails in Cypress Provincial Park. The BCMC board researched the issue in conjunction with the FMCBC Recreation and Conservation committee. What we found is that there was no public consultation as required and that the policy is in direct conflict with provisions protecting public access in the park master plan.

What follows is the text of a letter sent to Mr. Jim Standen, Assistant Deputy Minister, BC Parks and Conservation Officer Service Division on December 7th, 2016 by the BCMC.

[We] represent the British Columbia Mountaineering Club with more than 800 active members. We want to bring to your attention an important access issue in Cypress Provincial Park.

We are writing to ensure you are aware of our club's long standing use of the Howe Sound Crest Trail during winter months for a ski traverse between Cypress Bowl and Lions Bay. The ski tour requires a full day and avalanche risk mitigation. Standard protocol requires an early start in order to complete the trip in daylight and to manage avalanche risk on west-facing slopes which must be descended to Lions Bay late in the day. The earlier the descent occurs on warm sunny days, generally the lower the risk from avalanches.

Simply put, a 9 AM departure from Cypress Bowl puts our parties at risk. Yet, based on a new policy that came into being last winter and being enforced, I am told, by park rangers and commercial ski area staff, that as of last winter persons are not allowed to transit the 300 meter section of the Controlled Recreation Area between Raven Lodge and Yew Lake before 9 AM. The policy is not sanctioned in the Cypress Provincial Park Master Plan of June 1997, which was approved by Mr. Ray Peterson, District Manager, BC Parks and Ecological Reserves Planning Branch for Lower Mainland District.

On page 38 under the heading of Access Strategy, the master plan states the following:

We understand the policy of closing backcountry access is not sanctioned in the master plan and Howe Sound Crest Trail is a year-round public access route through the CRA without restriction.

Further, we obtained a BC Parks discussion paper regarding parking capacity in Cypress and Mount Seymour Provincial Parks dated August 2014. The issue is not about park safety, i.e. a hiker being squashed by a groomer, but about parking capacity.

On page 4 of the discussion paper, it stated under point #8,

The ski area operators do not wish to restrict backcountry access but to ensure that the CRA is used fairly, and that parking spaces accommodate ski area clients.

Any solution that will eventually be put in place to resolve the parking problem must respect the Access Strategy in the master plan. It seems to us that the ski area operator is using the backcountry access closure as a lever to pry further concessions on parking from it leaseholder, the provincial government. Gamesmanship and horse-trading on an issue of public safety is unacceptable to us. What is needed is open, honest dialogue and recognition of the need for public access through the CRA as authorized in the Park Master Plan.

I am asking on behalf of the B.C. Mountaineering Club that the current backcountry access closure policy be immediately ended. Our club members are intent not put our lives at risk and to continue to use the Howe Sound Crest Trail at our time of choosing as authorized in the Park Master Plan. While we believe the onus is on your office to work towards the resolution of this conflict, we stand ready to work with other affected parties to find a solution.

The B.C. Mountaineering Club with more than 800 members has cited the actions of Cypress Mountain Resort in closing the backcountry access corridor to Howe Sound Crest Trail as harmful to public safety. Meanwhile, BC Parks has stood by doing nothing to prevent it but has endorsed the resort's backcountry access policy by reportedly stationing park rangers to help enforce it.

Here is the text of the letter the BCMC recently wrote to Mr. Jim Standen, Assistant Deputy Minister, BC Parks and Conservation Officer Division.

BC Parks is failing to follow their own master plan by preventing access to the Howe Sound Crest Trail between the hours of 10 PM to 9 AM during the winter months. The concern with public safety expressed by Mr. Jim Standen, Assistant Deputy Minister is a sham. For further information on the closure read here: Cypress winter road closure next steps

The flag person that is currently preventing backcountry access could easily be stationed where the groomer crosses the trail instead of at the gate. Some strongly suspect the concern is not with public safety but that backcountry users are taking up the early bird parking spaces and causing paying customers to walk further. The inequity has resulted in the creation of a policy to prevent park access, a policy that is clearly not sanctioned in the park master plan.

The selected excerpts below show clearly that BC Parks is failing to follow its own master plan. Bold highlights added by 2020.

Selected Excerpts from the Master Plan

The challenges include supporting the spirit and intent of the existing permit [Cypress Bowl Recreations Ltd.] which includes the opportunity to provide significant valid commercial recreational services, while ensuring that the evolving public expectations for non-commercial recreation experiences are sustained; ensuring that the legitimate recreation uses that are to be fostered in the Intensive Recreation Zone can be managed in a manner that is in harmony with users of adjacent zones;