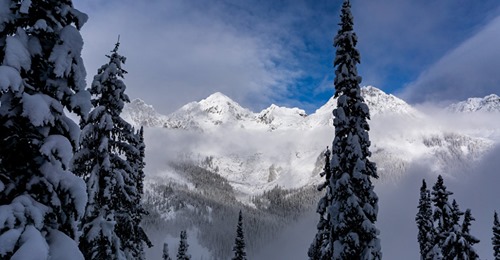 A massive ski resort has been proposed in the Central Selkirk mountains between Kaslo and New Denver. The public comment period has begun; this is your chance to speak up.

The proposal would cover 55 square kilometres of the mountains north of Highway 31A, bordering Goat Range Provincial Park. The developer says he wants to make these wild mountains like Switzerland: a ski resort for up to 1,500 skiers daily, a real estate and village development in the middle of the mountains, and year round recreation in the middle of important wildlife habitat.

Intensive backcountry development and recreation are already stressing sensitive wildlife populations in the Central Selkirks. Adding a ski hill will only make things much worse.

Development within this area, including a lot of year-round recreation, will displace wildlife such as grizzly bears, wolverines and mountain goats from important habitat and threaten population stability for these critters by cutting off critical animal trails (known as wildlife corridors). Read more about the resort proposal.

The expression of interest is here: https://backcountrybc.ca/document-category-layout/zincton-resort-proposal-may-2020/viewdocument

Concerns around this proposal are from a backcountry access point of view.

The resort proposal is stated to be an all-season resort. This would come under the All Seasons Resort Policy of the province which is administered by Mountain Resorts Branch. The proponent is asking for a "controlled recreation area" or CRA. The concern is that public access is restricted or denied unless a guest of Zincton resort. That means parking is restricted or no longer free. It means public access is restricted or no longer free. A concern arises in the expression of interest document in that the term "controlled recreation area" is never mentioned and the acronym CRA only appears once in the EOI and is never fully explained. This vagueness may be intentional because the potential loss of public parking and access is bound to be a sore point with backcountry users.

On page 7, the EOI states that the zoning of the Zincton lands by the Regional District of the Central Kootenay are Resource Area. The zoning permits public recreation. It was not adequately explained in the EOI how a controlled recreation area under the provincial all seasons resort policy coexists with or accommodates the zoning by the regional district. The concern is that public recreation access will be lost.

On page 11, the EOI states that "Zincton represents the highest and best use of the subject Crown lands." This is subjective. In commercial real estate this assumption can lead to businesses paying tax rates that are not linked to a fair tax rate. In the case of Zincton, it is used to appeal to the province that public recreation is getting a free ride and that only the resort can provide a fair return on the Crown lands.

On page 12, the EOI lists four "active recreation lines (i.e. trails)" within the resort area. It states "Throughout development and operation, Zincton will ensure there is continued public access to these trails." This is too vague. The proponent must be more specific because access to the trails and trailheads may require passing through the controlled recreation area. The proponent must specifically commit to parking areas and defined backcountry access corridors that are open at all times (i.e. 24/7, 365 days a year). The backcountry access corridors, parking areas, number of vehicles accommodated etc. should be explicitly defined and shown on maps. There must be adequate signage indicating the corridors. Any waiver requirements must be explicitly stated and where free waivers are easily obtained. A template for free waivers, if required, could use the model that Cypress Resort uses in Cypress Provincial Park.