SCRD supports bid by Mountain Adventures - If at first you don't succeed... 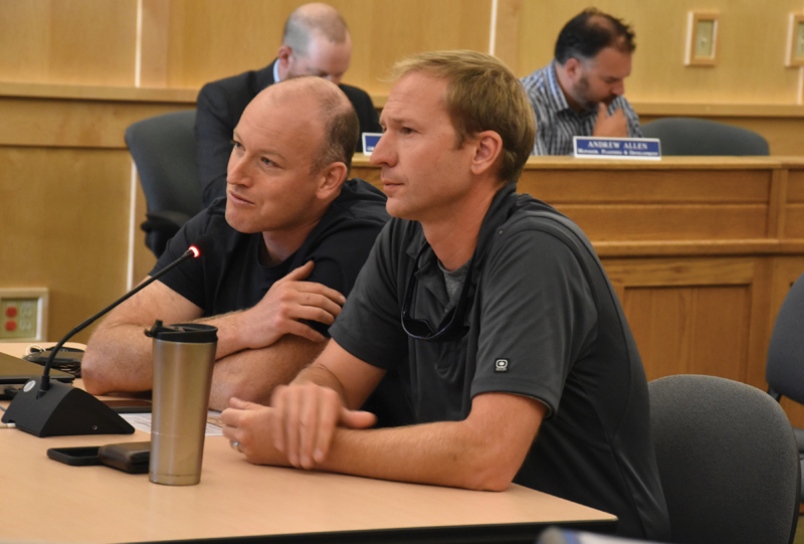 Areas in the Phantom Lake and Woodfibre Lake areas would have overlapping tenure with Sea to Sky Air and Black Tusk Helicopter, which provide similar services based on the Squamish side. Sneddon said the tenure does not provide exclusive access and trails would be open to members of the public. “Other people are welcome to use the trails and infrastructures that we create,” said Sneddon. “No one’s being kicked out of an area for their normal recreation.”

None of the areas is within Tetrahedron Provincial Park, though Mt. Crucil’s peak is a kilometre south of the park’s southwest boundary.

The operational base and head office would be located at Airspan Helicopters’ main hangar in Wilson Creek, with a storefront at Off The Edge Adventure Sports in Sechelt. Clients could also get helicopter rides from Coal Harbour in Vancouver.

According to an SCRD staff report, the construction of trails and tourism operation would span the summer of 2018 to 2021, with heli-hiking and sightseeing available as soon as next summer. Trail layout and construction for mountain biking would occur then, too. The project overview describes the trails as linking game trails, ridge tops and hard surfaces, which will be “low impact,” with some wooden bridges. The company will also construct four campsites during the construction phase.

An environmental management plan was included with the application.

The application must be approved by the Ministry of Forests, Lands, Natural Resource Operations and Rural Development, which requires feedback from the SCRD. The SCRD staff did not have any objections to the application, though CAO Janette Loveys did note that the referral is “a little outside the norm” of what the SCRD normally receives. “It is actually a whole program,” she said.

Several directors were skeptical of the project when it was introduced at a June 14 committee meeting.

Most outspoken was Mark Lebbell, director for Roberts Creek, who said he had “significant concerns with the project,” later adding, “I don’t really have the sense this is the right application for this part of the world at this point.”

Among his concerns was the development of infrastructure in the backcountry, especially without an integrated land use plan in place, harm to wildlife and the environment and a lack of emergency response planning. “This is an inherently impactful activity … and it brings up whether it should be a permitted activity back there,” he said. Elphinstone director Lorne Lewis, Halfmoon Bay director Garry Nohr and West Howe Sound director Ian Winn shared Lebbell’s concerns.

If the tenure application is successful, the applicant will develop an emergency management plan – a requirement for insurance.

Lebbell also questioned “whether there is a void that needs filling,” with regards to tourism, given that the services will be available “only to certain folks who are able to afford their access.”

According to the staff report, “the proposed adventure zones overlap various land use zones of the shíshálh Nation Strategic Land Use Plan, including conservation, cultural emphasis, stewardship and community forest areas.”

Keith Julius, director for shíshálh Nation, said the project sounds like a “great idea,” but was worried about wildlife if helicopter flight paths aren’t regulated. “I’m worried we’ll be chasing wildlife,” he told the committee.

Warren and Sneddon said consultations with shíshálh and Skwxwú7mesh Nations have been initiated and that the Nations “were involved a long time before the regional district was.” Warren also added that “a deeper meaningful” communication will take place.

SCRD chair Bruce Milne was more positive about the application. “We’re talking about a local family with a long and deep backcountry and forestry history… and I think we should keep in mind that they probably share the same values as the community at large and the board,” said Milne.

“Our business plan is taking a precautionary principle,” Hansen said. “It’s very planned growth, it’s taking a cautious approach to make sure we’re promoting it in a way that’s sustainable, that we learn from our mistakes, that we make sure we do it right.”

SCRD voted to ask the province for an extension to the comment deadline so that directors can invite the applicant to speak with directors, as well as host a public information meeting about the proposal.

This was the second time directors voted on the application, which was submitted by business partners Kris Sneddon and Paul Tosczak. If they get approval from the province to operate in areas such as Phantom Lake, Woodfibre Lake, Clowhom Lake and near Mt. Crucil and Buck Mountain, it will be the first local business of its kind to operate in those areas of the Coast.

The company, Sunshine Coast Mountain Adventures, would provide helicopter rides into the backcountry and guided biking, hiking and climbing routes and even “heli-picnics.”

This was the second time directors voted on the application, which was submitted by business partners Kris Sneddon and Paul Tosczak. If they get approval from the province to operate in areas such as Phantom Lake, Woodfibre Lake, Clowhom Lake and near Mt. Crucil and Buck Mountain, it will be the first local business of its kind to operate in those areas of the Coast.

The company, Sunshine Coast Mountain Adventures, would provide helicopter rides into the backcountry and guided biking, hiking and climbing routes and even “heli-picnics.”
Directors sought an extension on voting on the referral in June and encouraged the owners to engage the public by hosting a public information meeting, by meeting with SCRD advisory planning commissions (APCs) and by appearing as a delegation before directors at a committee.

Since June, Sneddon and Tosczak attended APCs in Pender Harbour, Roberts Creek and West Howe Sound, as well as the natural resource advisory committee, but they didn’t hold a public information meeting.

They did appear as an invited delegation at the SCRD’s Sept. 6 planning committee where Tosczak admitted they had “drawn a lot of attention from concerned people.” They said it was “a matter of time before” wealthier non-local companies make inroads and that they wanted to “take a stab at” the industry, “ourselves being a locally, home-grown couple of guys that have a vested interest in the community.”

They did not provide specific answers when directors asked how they would incorporate concerns raised by APCs, and when asked whether they would hold a public information meeting, they said they would do so only if legally required.

SCRD chair Bruce Milne said he was very hesitant after listening to them “simply discard” the directors’ questions and said their resistance to working with the community was “upsetting.”

Despite those concerns, Milne said he remained supportive of a local backcountry tourism business and said it was an opportunity for “our community to take control” of the emerging industry on the Coast.

Several directors raised concern about the lack of regulation and land use planning in the tenure application areas. The most critical was Lebbell who said, “Some places should be left wild,” and called it the “Whistlerization” of the region.

Lebbell introduced a motion to recommend the province refuse the project, citing concerns for wildlife and the environment and the lack of land use planning in the area. Lewis seconded the motion, and said while he was not opposed to the proposal, he wanted to see it “regulated and managed” before operations start. The motion was defeated.

Halfmoon Bay director Garry Nohr said he has seen people fly planes into Phantom Lake from Whistler and Vancouver for picnics. “I thought to myself, wow, and here we are trying to regulate a local company and making it rough for them.”

Directors also asked the province to create regulations and set up a means of monitoring to control the company’s proposed activities in the backcountry.