The developers behind one of B.C.'s longest running land-use battles — the Jumbo Glacier ski resort near Invermere — are back in court on Monday trying to resurrect the failed project.

The decades-old proposal to build a year-round ski resort in the Purcell Mountains in southeastern B.C. was killed three years ago by the B.C. Liberal government when it decided not to renew the environmental assessment certificate.

In 2015, then-environment minister Mary Polak ruled that that the developer had not substantially started the project by the time the assessment was set to expire.

That appeared to kill the project for good, but now the developers, led by Vancouver's Oberti Resort Design, will be back in court on Monday morning asking a judge to overturn that decision.

The project was first launched in the early 1990s when a Japanese developer originally proposed what eventually became a 6,300-bed resort village with more than 20 ski lifts and year-round skiing on the glacial terrain.

While the project eventually received strong backing from the B.C. Liberal government, many locals opposed the development plan due to the fact that existing ski hills in the area were already struggling.

All major projects in B.C. must have an independent environmental assessment before they can proceed. The certificates last five years, and can be renewed just once at the environment minister's discretion.

After that, if the minister decides no substantial construction on the project has been started, the certificate expires and can no longer be renewed.

In the case of the resort, only two concrete pads were laid by the company by the time the environmental assessment certificate ran out in 2014.

Because of that, the minister announced the certificate would not be renewed, effectively killing the controversial project.

In 2015, then-environment minister Mary Polak decided to not renew the environmental assessment certificate for the Glacier Resort, effectively killing the project. (CBC)

But the project's lawyer, Greg Tucker, says he plans to argue in court that construction was delayed because of a wide range of factors outside the company's control.

"Glacier's view and position is that they did absolutely everything that was frankly physically possible within the constraints that were placed on the project," said Tucker.

The project also faced opposition from the Ktunaxa Nation, which said the land was the spiritual home of the grizzly bear. Most recently, the Ktunaxa Nation lost its court battle to have the proposal stopped because it violated their religious freedoms.

And that's where the resort's second argument comes in. Tucker claims it wasn't really the lack of construction that killed the project — it was a political decision.

Members of the Ktunaxa First Nation gather outside B.C. Supreme Court in 2015 awaiting the beginning of their bid to overturn a ruling that allows the Jumbo Glacier Resort development to transform land they consider sacred. (CBC/Farrah Merali)

In court documents, the developers allege that after the permit expired, government staff told them that "the minister was close friends with Katheryn Tenesse, of the [Ktunaxa Nation Council], the primary opponent of the project."

"The only reasonable objective inference to be drawn from the late statement is that the decision was influenced by matters irrelevant to the question of whether the project had been substantially started." says Glacier's petition to the court.

A spokesperson for the Environment ministry declined to comment on that claim, saying the matter is before the courts. 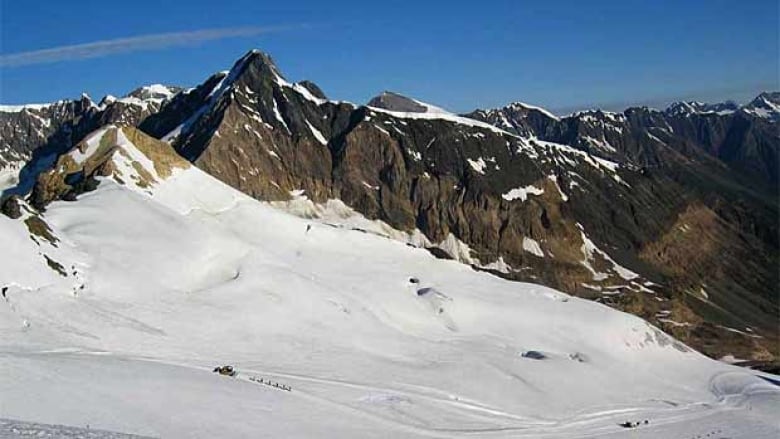 Environmentalist Robyn Duncan, whose group Wildsight has been fighting the project for two decades, disputes the claim that politics can be blamed for the expiration of the certificate.

"What you see in the history of the Liberal government is in fact very strong support to keep the Jumbo resort moving forward," said Duncan.

"To argue it was a decision was a political decision flies in the face of the facts."

And she says the decision made in 2015 should stand.

"We think the facts are really simple. They had ten years to start development and in that ten years all that was built on this mega resort was two concrete pads in the very last week of the environmental certificate."

Could project go ahead?

The hearing is scheduled to run three days this coming week in B.C. Supreme Court in Vancouver.

Tucker says he's hoping the judge will overturn the 2015 decision and grant an extension that could see construction get underway this summer.

"If Glacier gets over this hurdle... that's the last hurdle to getting further construction and proceeding with the project."

Regardless of what decision is made, lawyers on both sides note they could appeal the decision, meaning the case could be in the courts for years to come.