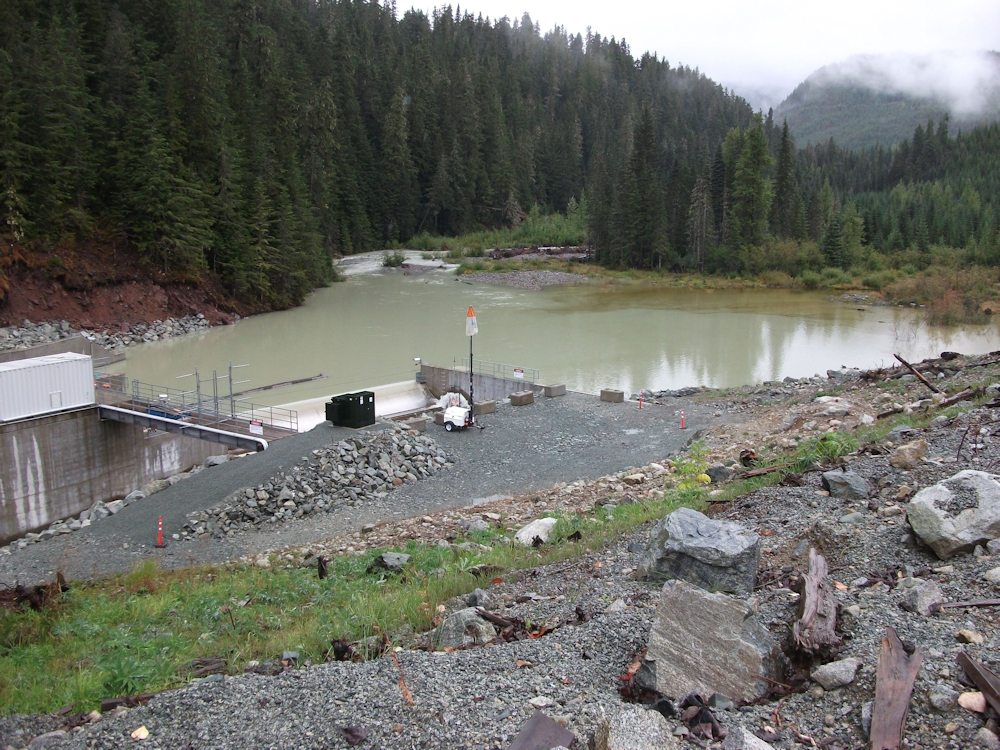 This is the Development Plan for the Skookum independent power project (IPP).

While the Sea to Sky LRMP and Co-ordinated Access Management Plan discuss limiting access to Garibaldi Provincial Park crown agencies have not installed any access controls in the vicinity of the Skookum Branch. The entire Skookum Creek area is proposed as a Land Act Reserve for the purposes of limiting non-industrial public access to Garibaldi Park. SSPC’s reconstruction of the Skookum Branch to the intake does not increase access to the park as the road is existing. Future access upslope towards the BCTS cutblocks along the border of the park may require access control lower down the slope. Decisions as to access control in this area are best made by the Crown as it is the Parks Branch of the Ministry of the Environment that has articulated the interest in precluding access in Crown provincial forest for the purpose of protecting Garibaldi Provincial Park.

This begs the question, what is the threat to the park? Park users?

This is the Environmental Impact Assessment PDF in the directory EXHIBITS/Ex 8. EIA.

The Skookum Creek study area has undergone substantial forest harvesting in the last 50 years by various licensees leaving relatively little old growth and mature forest at lower and mid-elevations in the watershed. As a result of the development, a road network exists on both sides of the creek. Access to the upper watershed is via the Mamquam FSR and then the Skookum Creek FSR on the east side of the creek. Final access to the intake is via S-Line, a non-status road. The Skookum Creek S-Line road was drivable until the late 1990s at which time sections of the road were deactivated or de-built under the legacy Forest Renewal BC program (F. Bauman, personal communication.)

With the re-activation of roads, improved access may in some areas lead to increased long-term recrational use and related impacts in the Skookum Creek watershed. A Land Act Reserve has been applied for in the upper Skookum Creek watershed by the Ministry of Environment. The intent of this reserve may be to limit motorized access for community recreation in this area. An access management plan for the project areas, particularly the intake site, will need to be developed in consultation with the regulatory agencies.

There is currently an application for a Land Act reserve from the Ministry of Environment, the intent of which is reportedly to apply motorized vehicle access restrictions for the watershed.

The provincial government is in the process of establishing an 1818 ha reserve area within the section of the Skookum Creek watershed that is outside of the surrounding provincial parks. The establishment of this reserve is expected to result in restrictions on motorized vehicles to limit access to the upper watershed which should reduce the potential for wildlife disruption within the project area.

FYI: 1818 hectares = 18.18 kilometers square. That's a large enough area to blanket the upper Skookum Creek watershed above the intake. It would include all the roads BCMC cleared in 2015.

It appears that the non-motorized reserve area has been established as of 2015. MFLNRO provided the BCMC with a map of non-motorized areas in Skookum Creek. Set the map on this site for Skookum RA1 Non-motorized Zone.