Dreadnought Peak sits on the southern boundary of Garibaldi provincial park about 1 kilometer west of the boundary of Pinecone Burke provincial park. It's a great ski peak. Access is normally from Watersprite Lake. It requires a very steep climb up from the lake on a south-facing slope. There can be avalanche danger that can be compounded by buried layers of suncrust, surface warming and other influences. This is a trip for experienced backcountry skiers. It should not be attempted when avalanche danger ratings are considerable or higher. Even under moderate danger ratings, there can be locally higher danger that is not reflected in avalanche warnings. For example, hot sun on south-facing slopes. In addition, forecasters may have incomplete knowledge of the area.

Watersprite Lake is approached from the Skookum power project road or the Skookum branch off Mamquam forest service road at approximately KM 16, where an unmarked winter route goes to the lake.

At the lake, the approach to Dreadnought climbs up to the north beyond the lake. The climb steepens as it approaches the ridgecrest that leads west to Demon Peak and north to Dreadnought.. It's often necessary to kick steps to gain the crest. 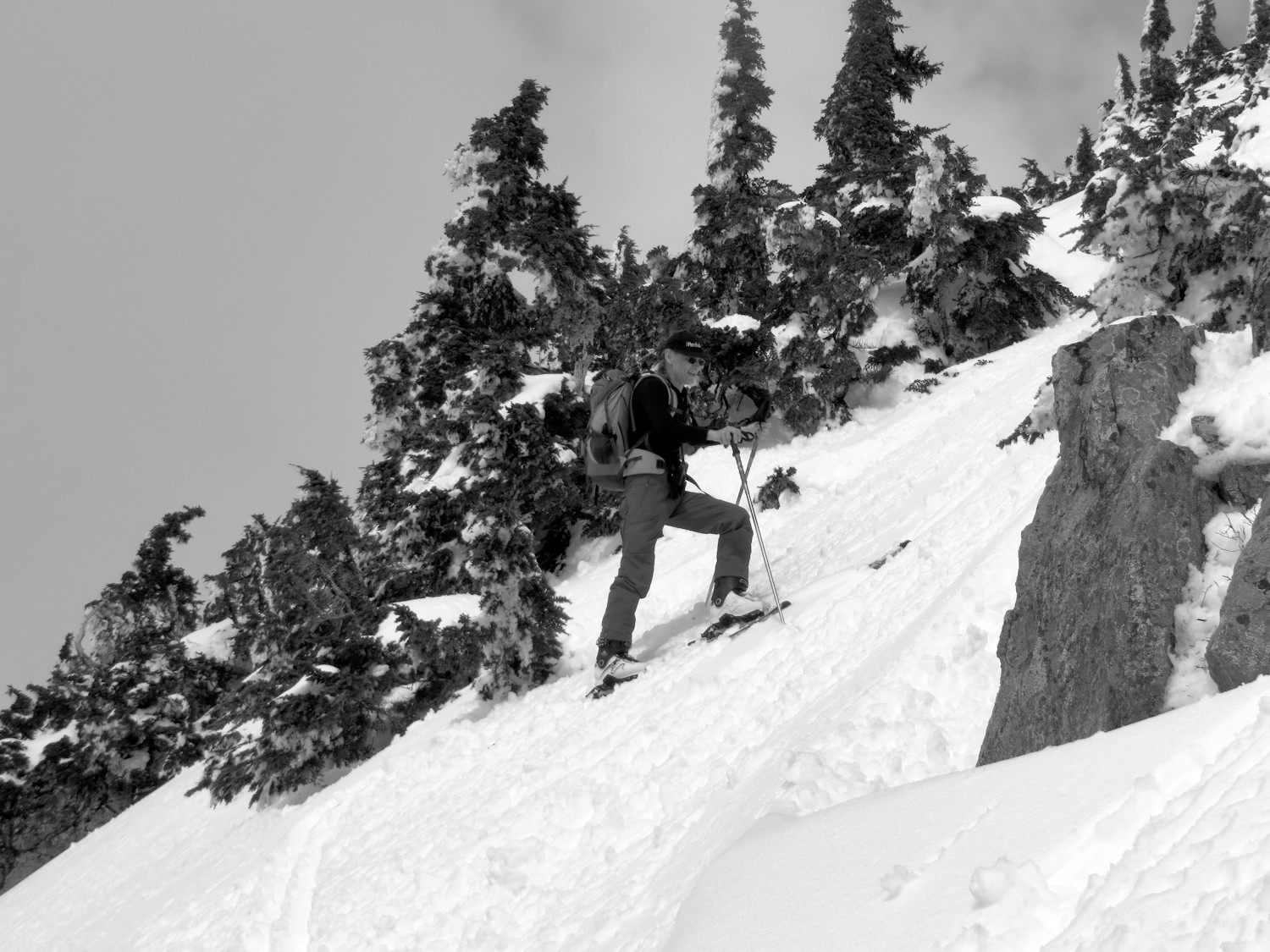 Josef Sadowski near approaching the ridgecrest on the approach to Dreadnought. 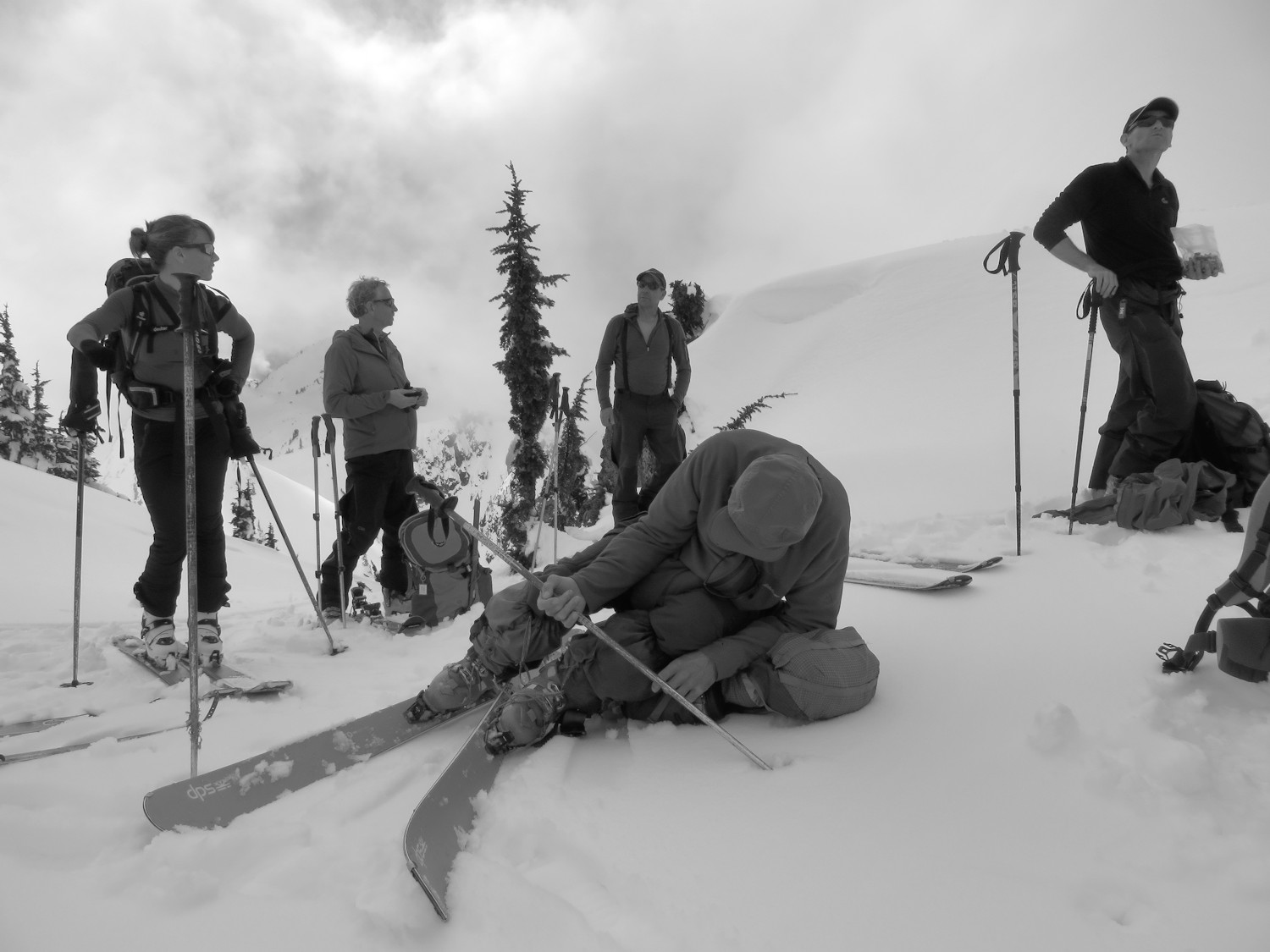 Regrouping on the ridge to Demon Peak. 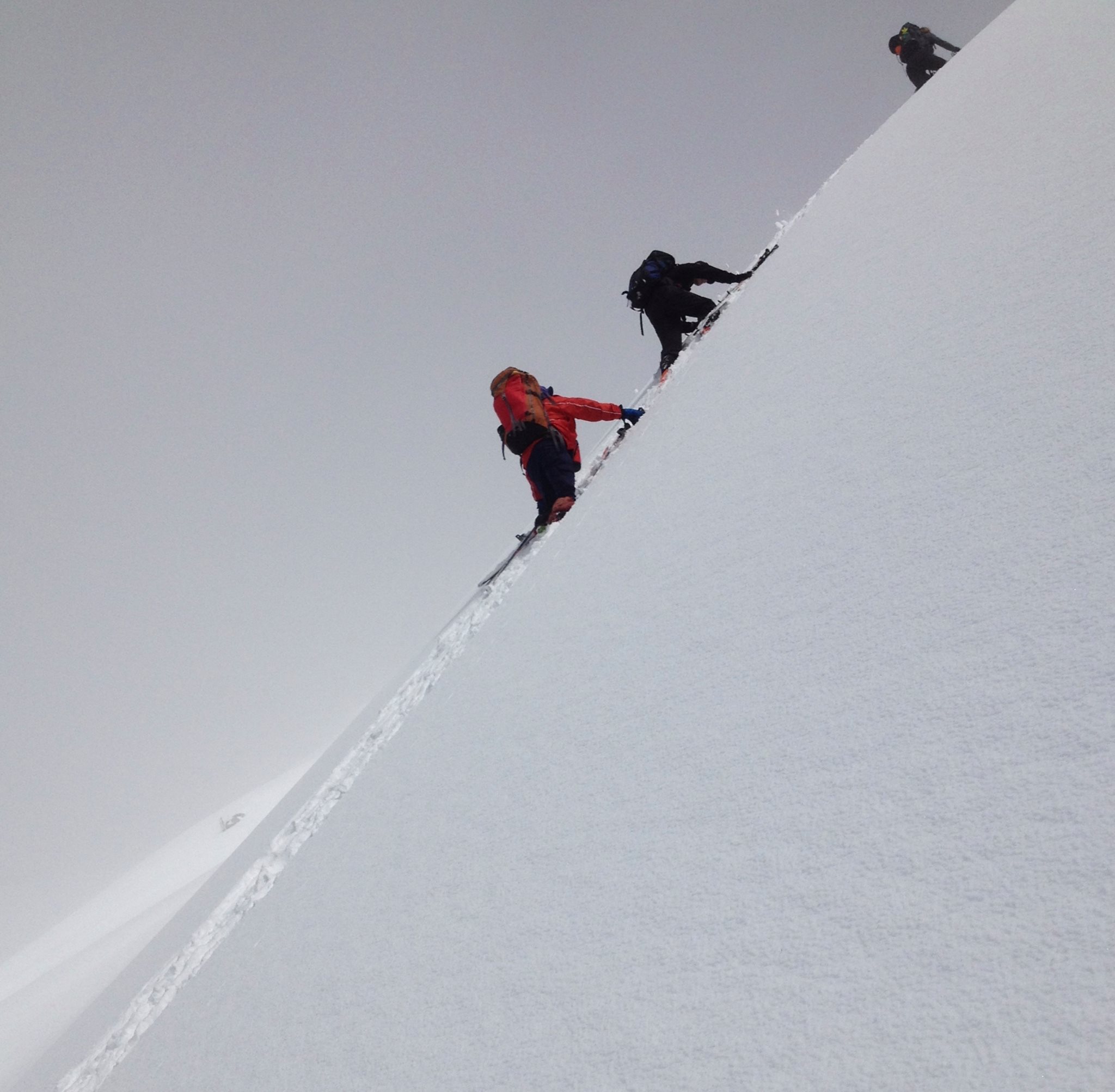 We elected to climb up to Dreadnought's south ridge rather than traverse its west bowl. 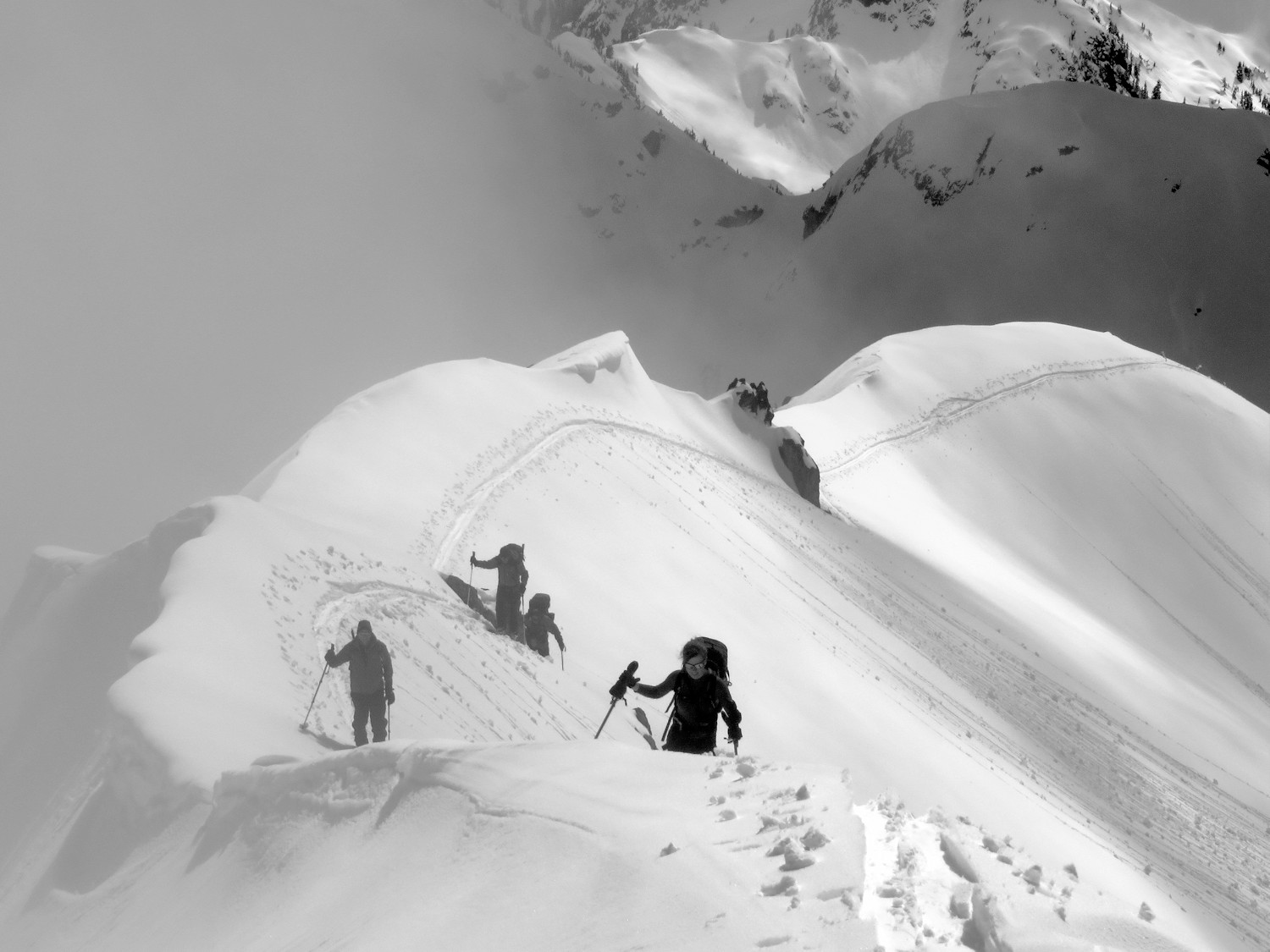 We skied along the south ridge of Dreadnought. 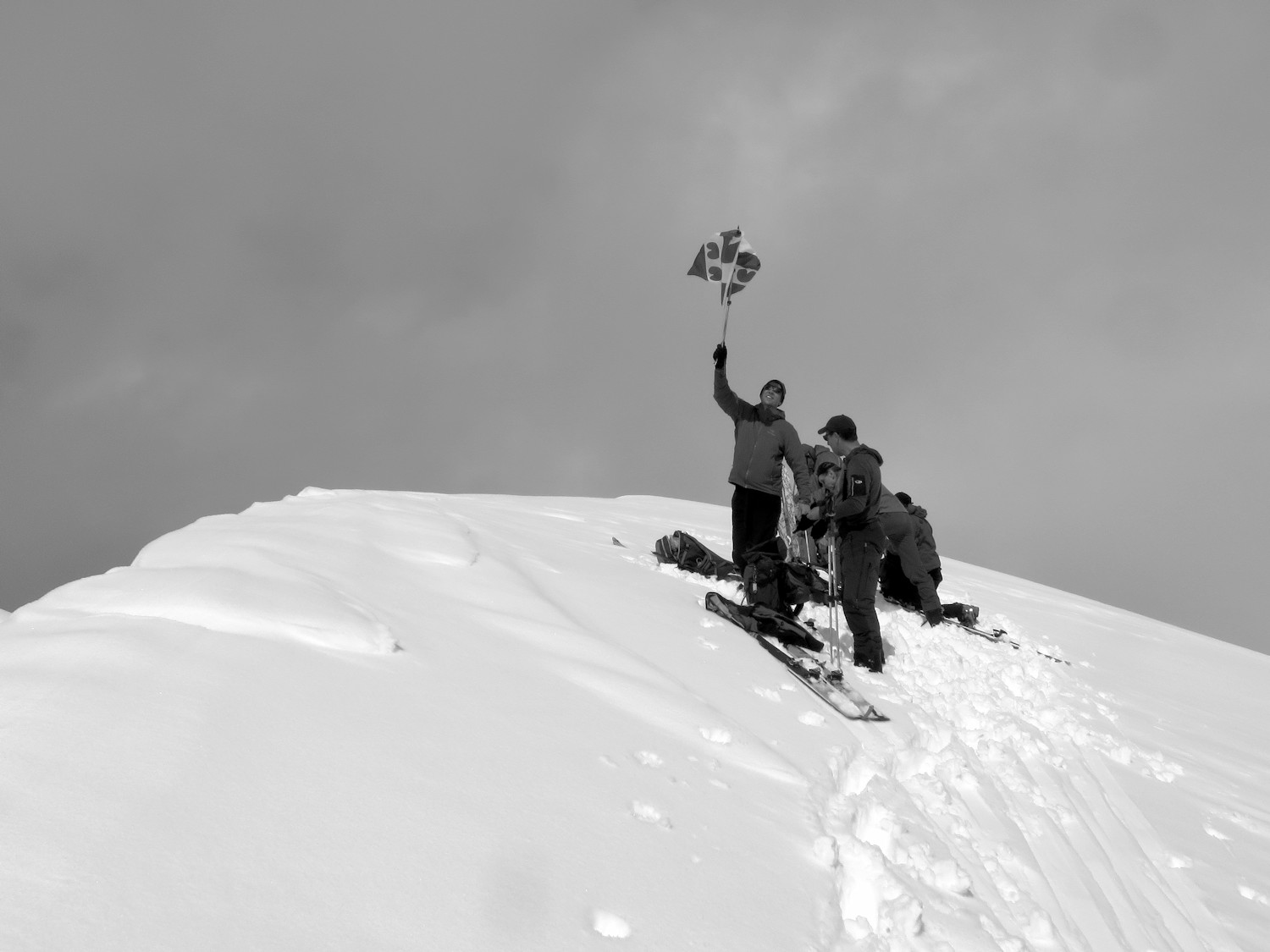 Henry Dejong claims the summit for the Dutch. 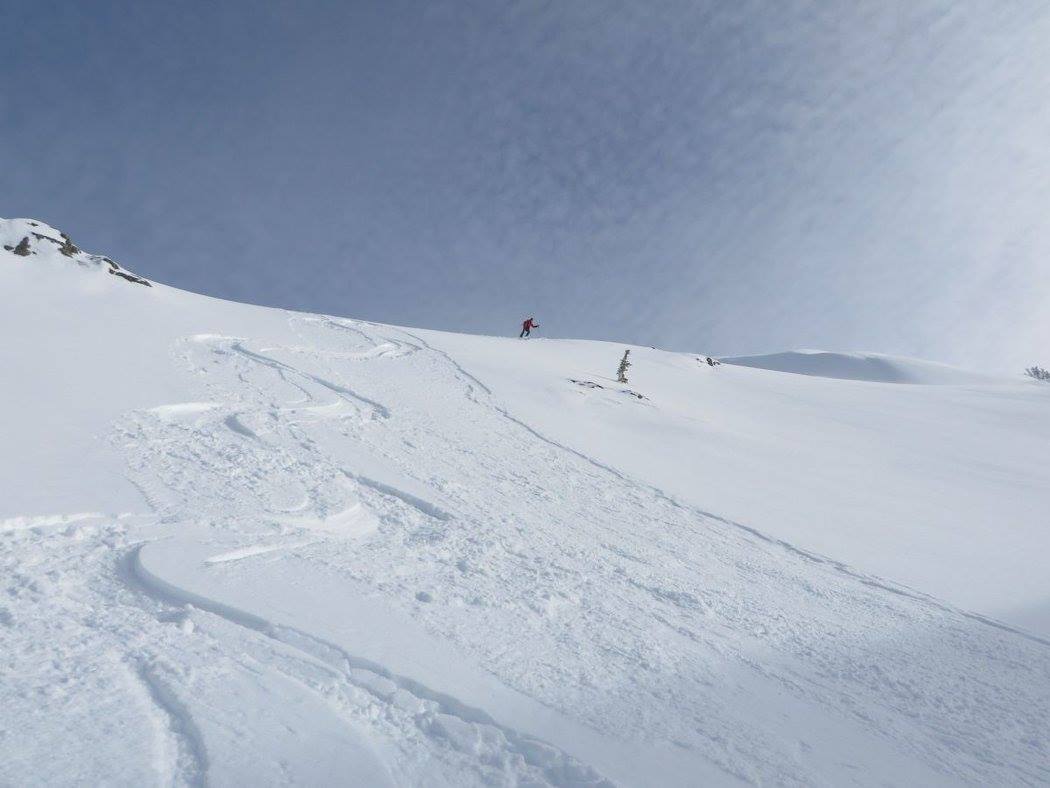 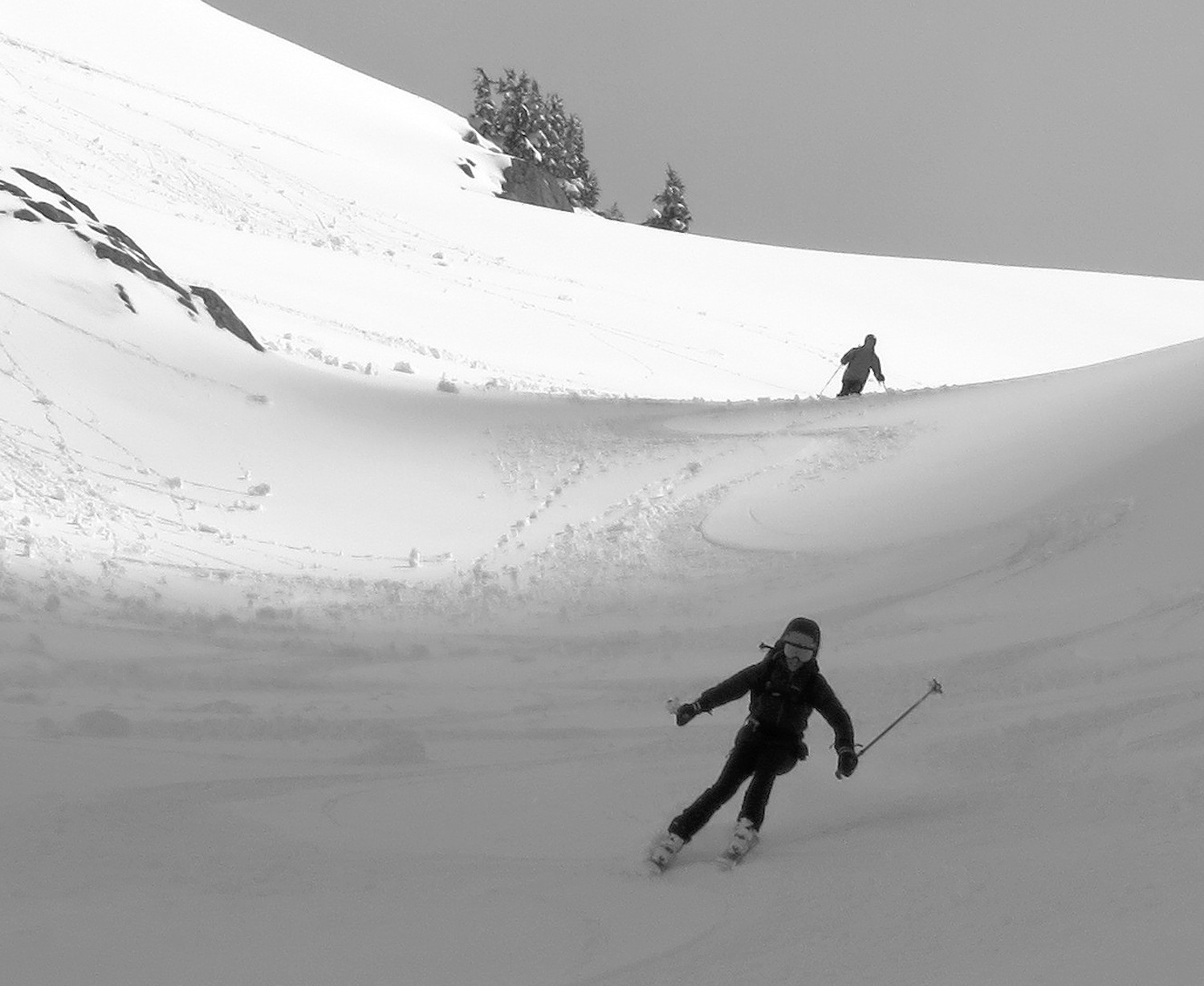 Virginie in the second pitch of the west bowl. 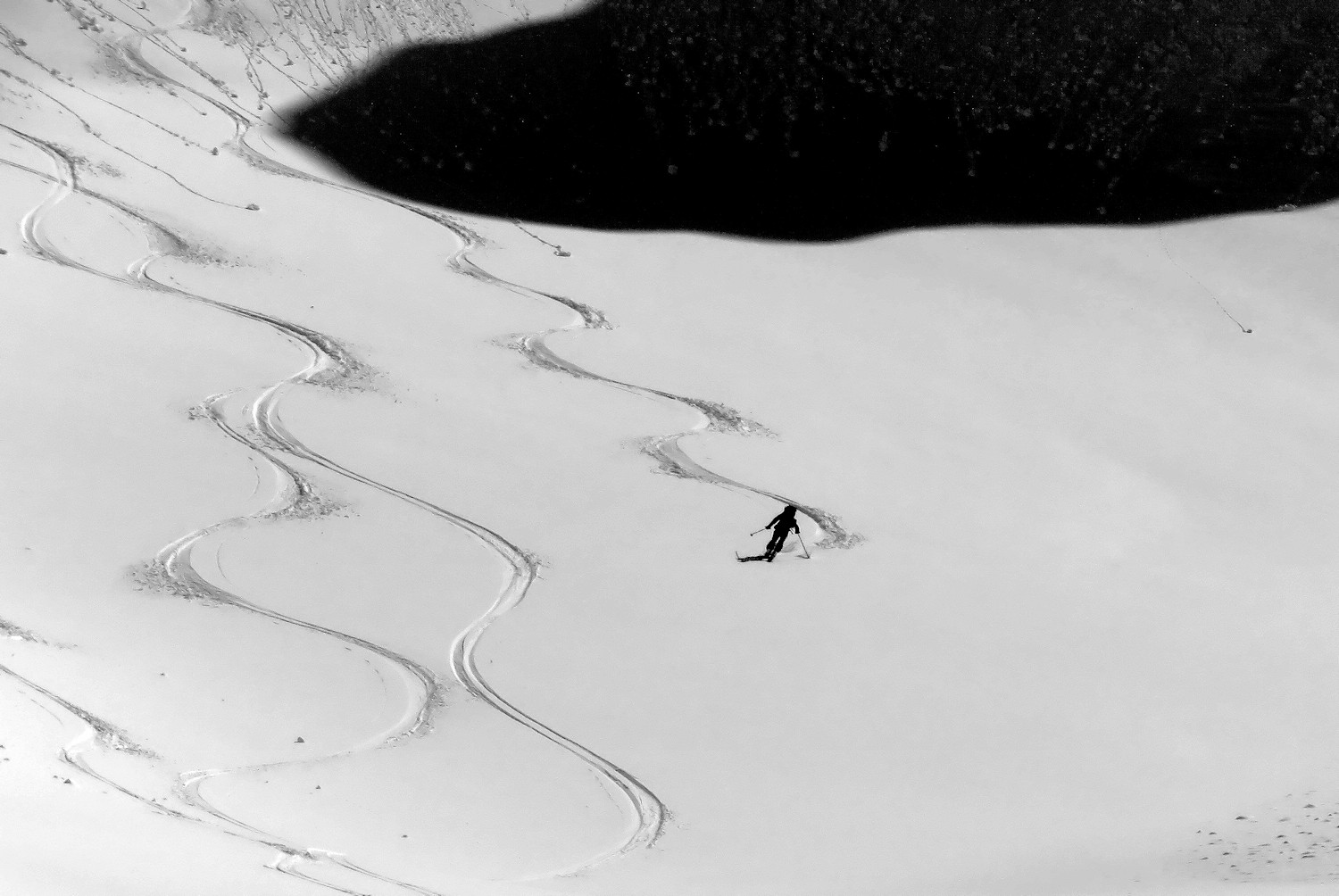 Bottom of the second pitch. 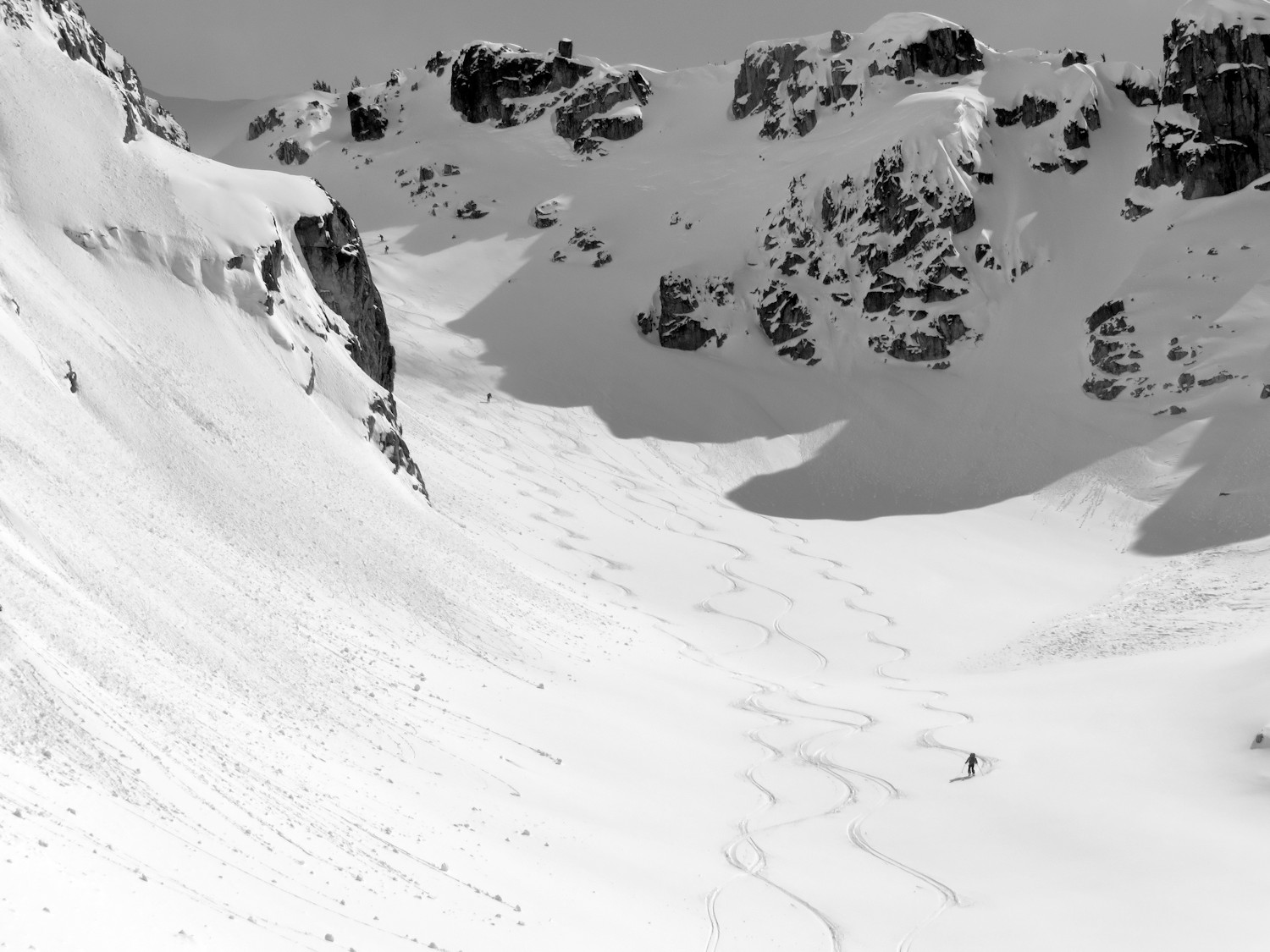 The mid-zone. Demon Ridge on the right.

Bottoming out on the third pitch. Going lower brings you to a cliff band. It's necessary to climb up and get onto Demon Ridge west of Demon Peak. 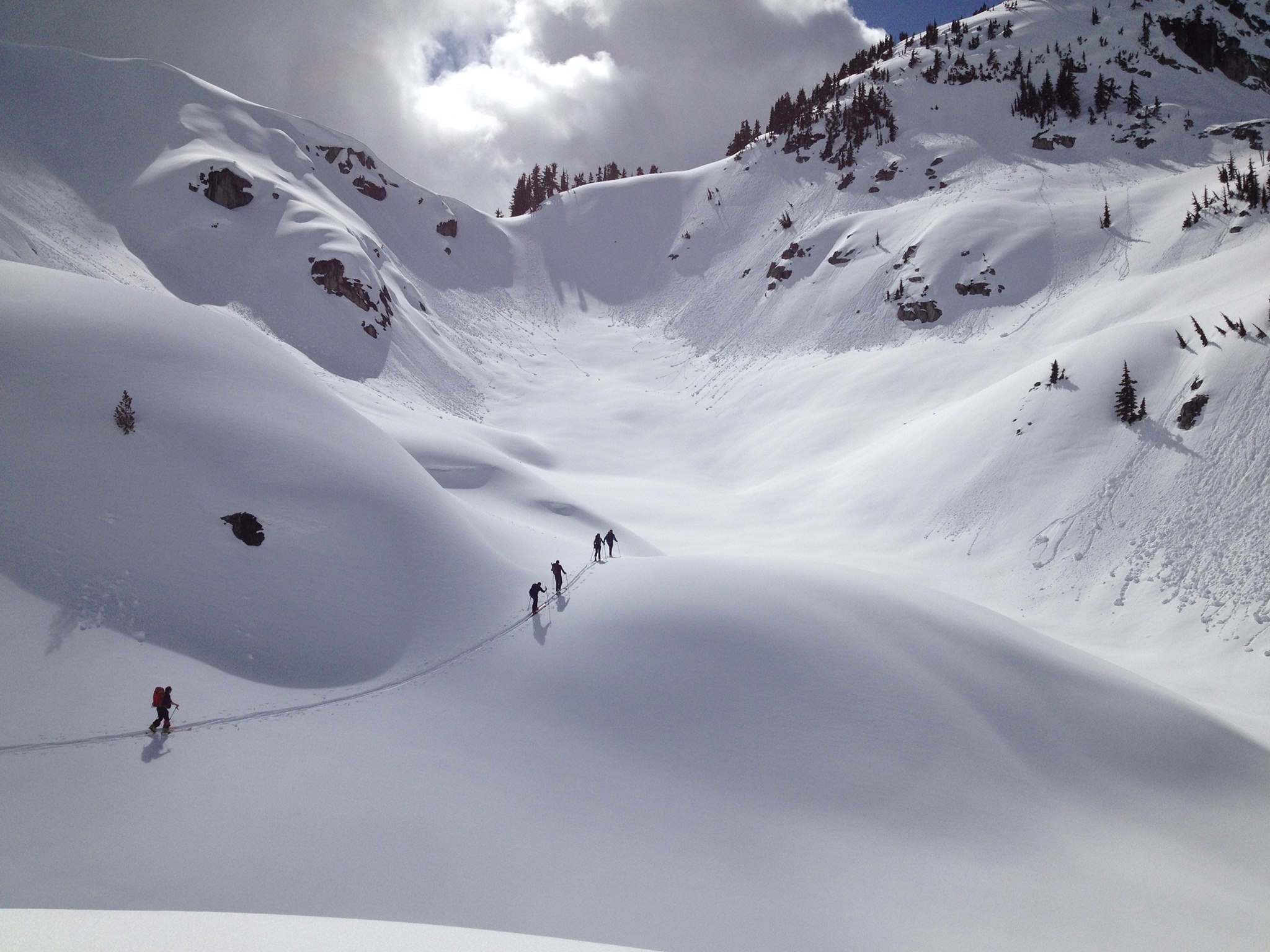 Climbing up towards Demon Peak. 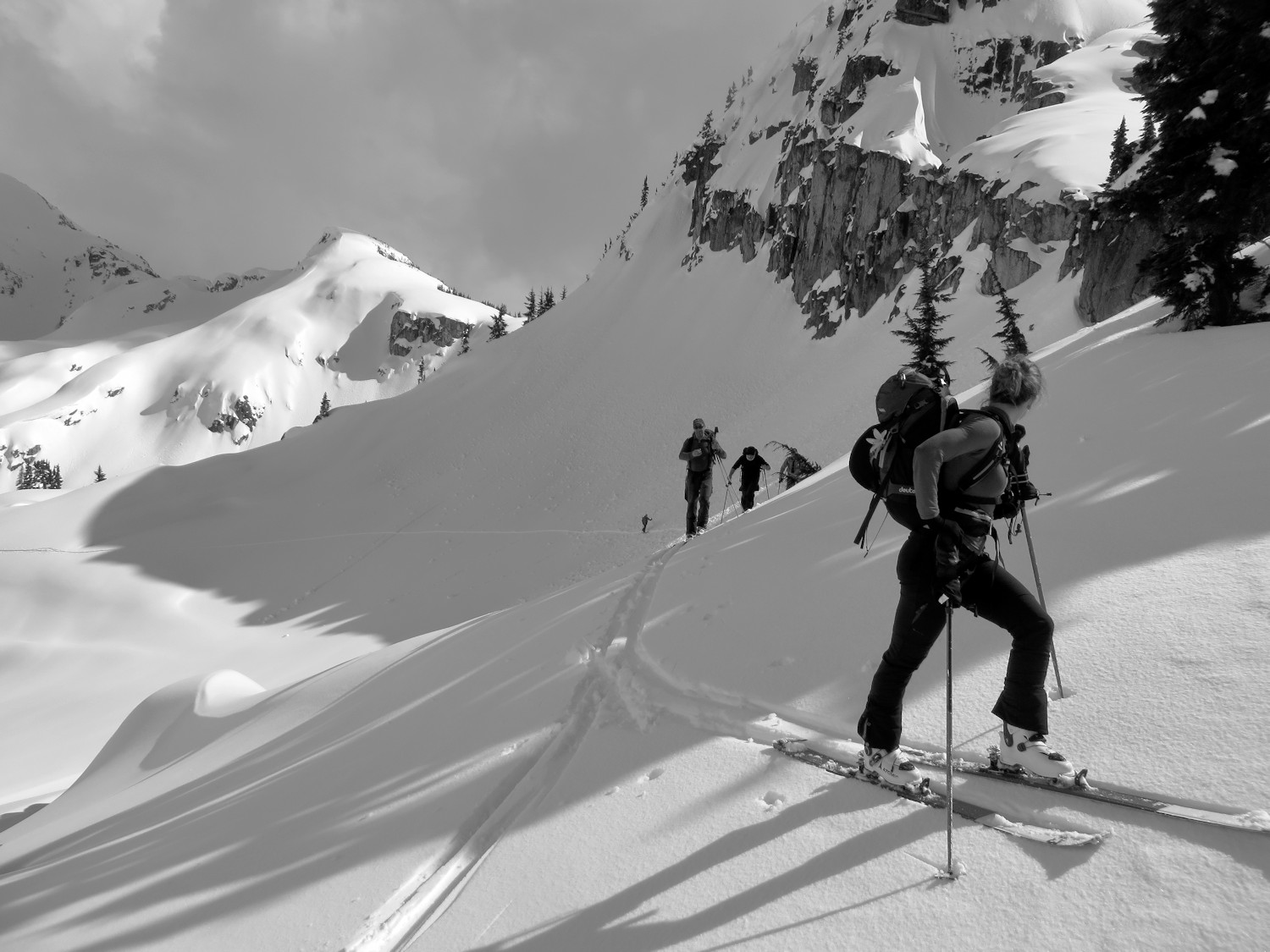 Traversing under the north side of Demon Peak. 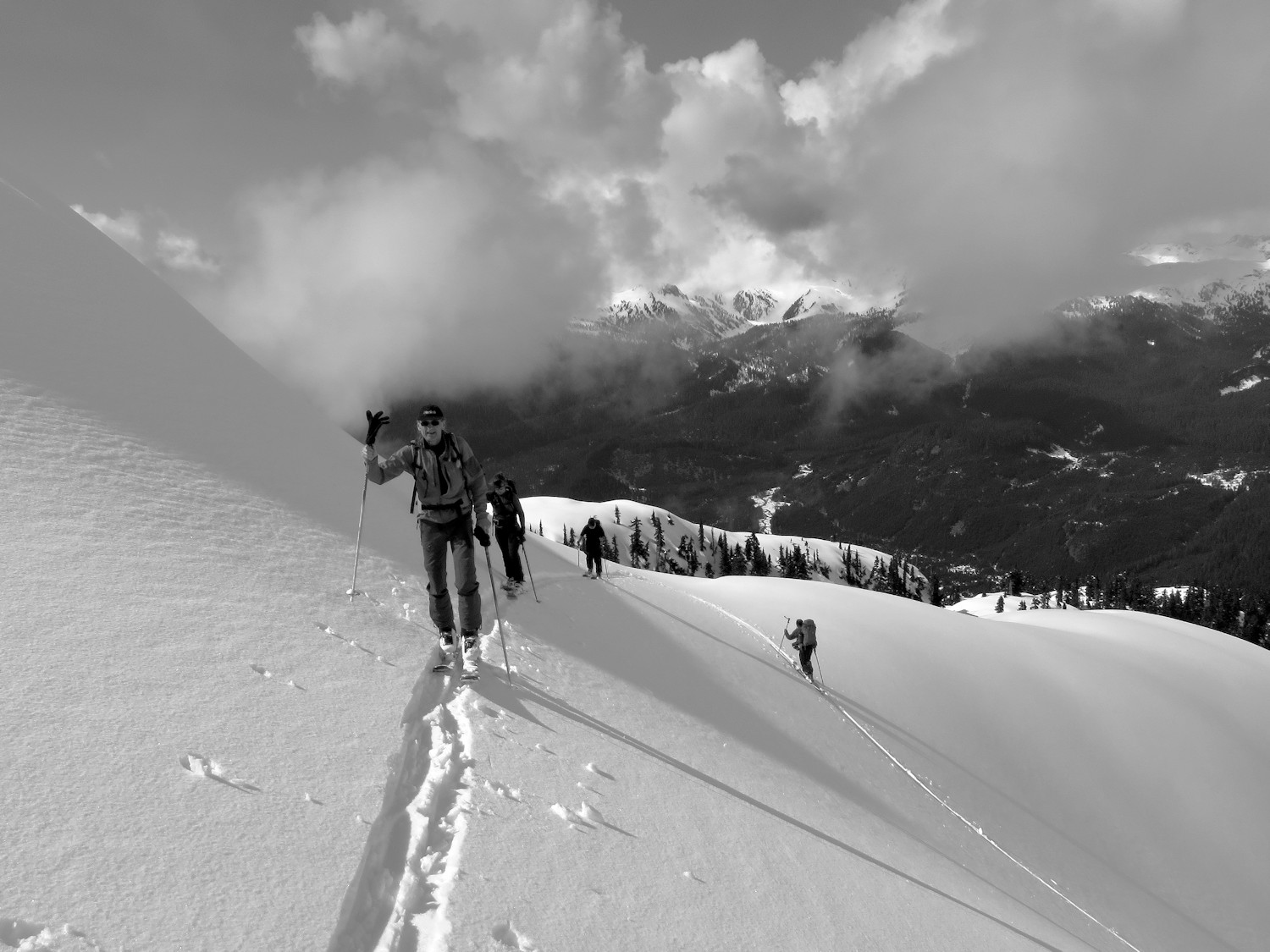 Heading up to Demon Ridge west of Demon Peak. 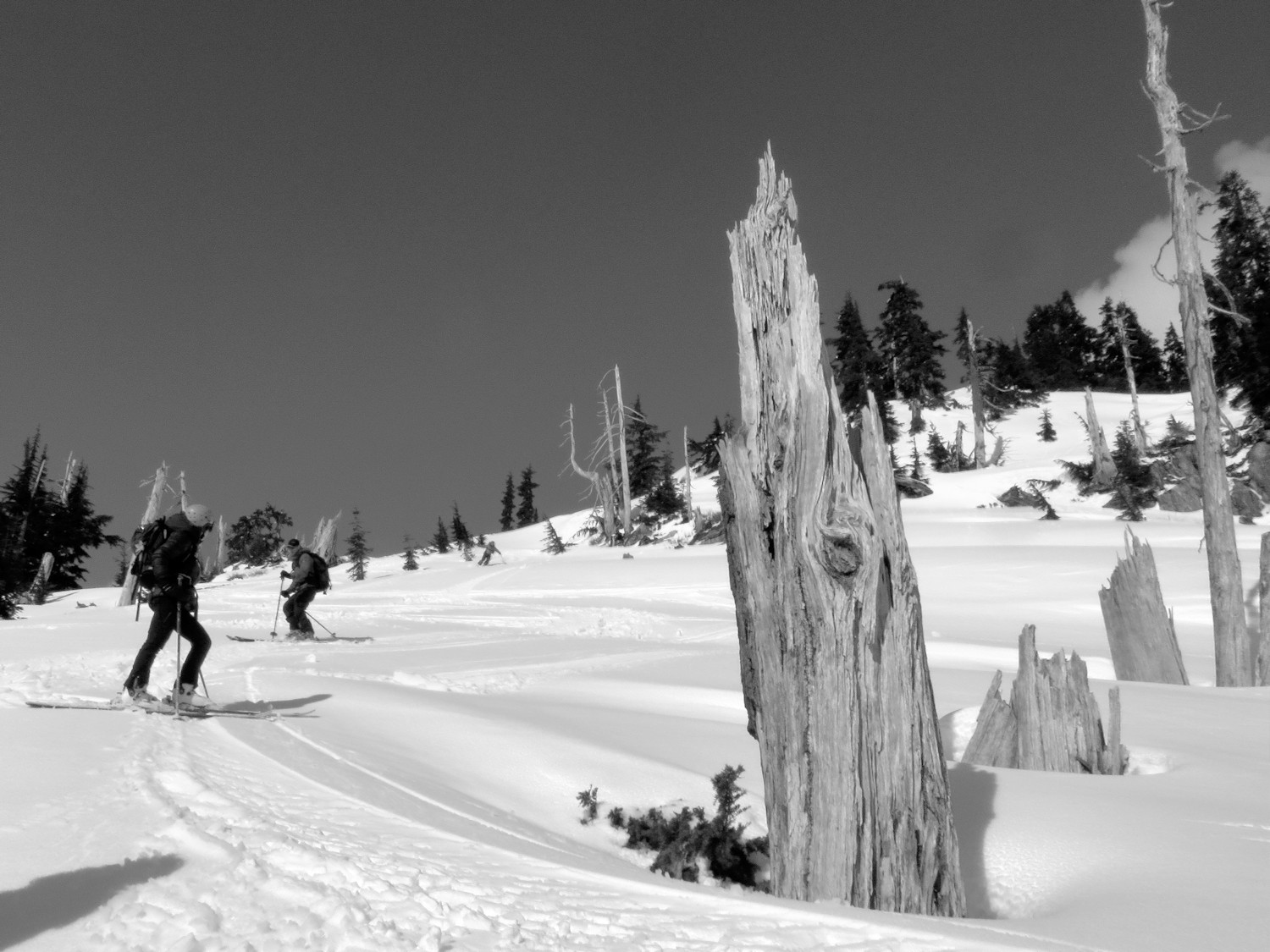 Top of the burn coming down the south side of Demon Ridge back to the Watersprite winter route. 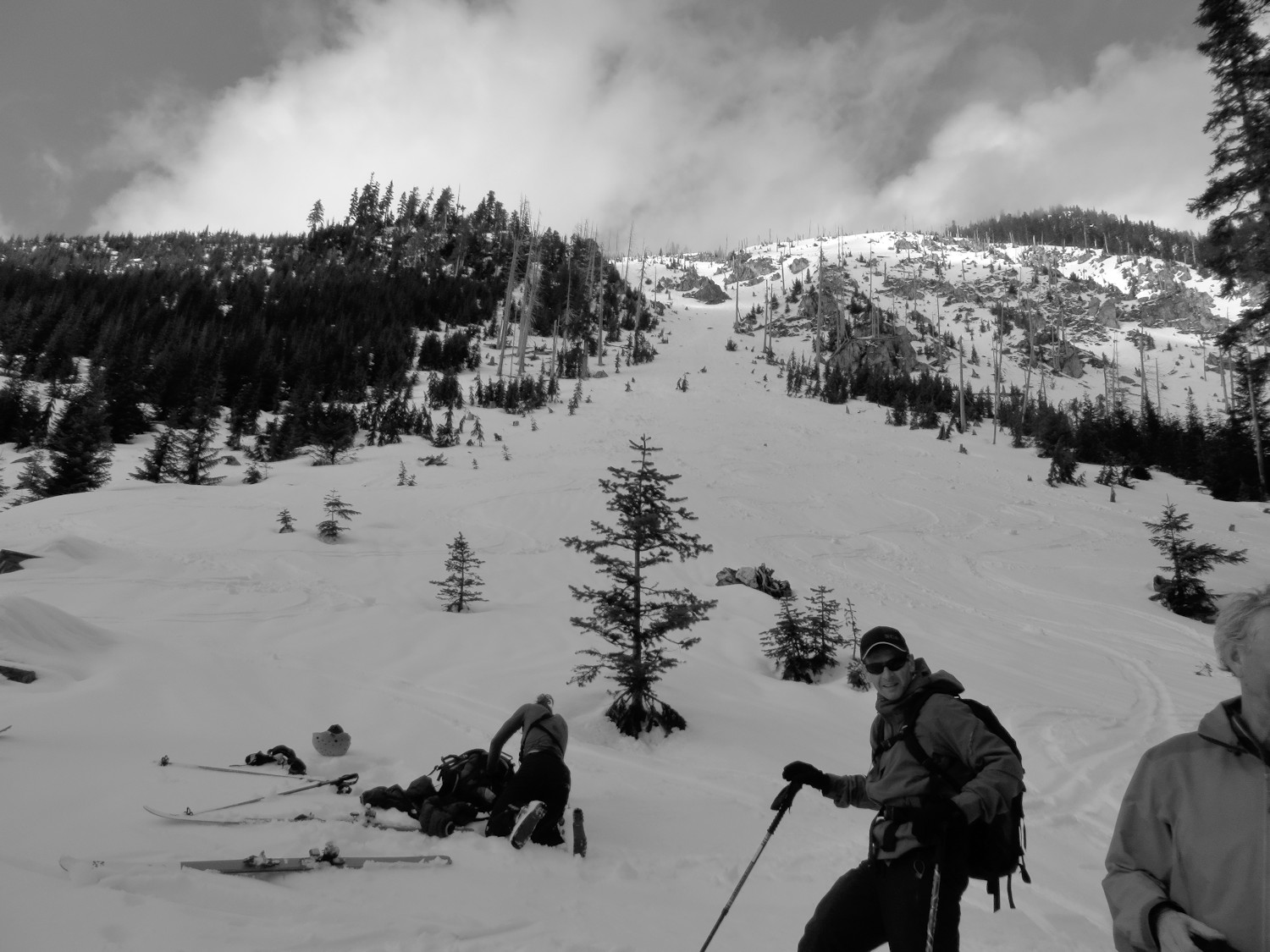 Bottom of the burn in the valley of Watersprite Creek.

Dreadnought Peak just left of centre. It's south ridge is on the right. The west bowl we skied is in the sunlight at the top and in shadow on the second pitch.